Hello! This is Priya.

Today, we will talk about some famous Indian classical instruments used to produce music.

There are two major traditions of classical music in India: the Hindustani music of North India and the Karnatak music of South India.

One of the most well known North Indian instruments is the sitar. This consists of a long neck with twenty metal frets and seven main cords. Below these, there are thirteen strings. A gourd serves as a resonator for the strings and is located at the lower end of the neck of the instrument. To adjust the notes, these frets are moved up and down. Pandit Ravi Shankar and Ustad Vilayat Khan are some famous sitar players. 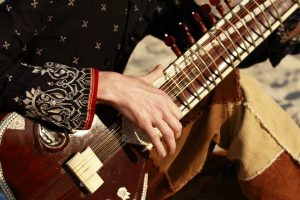 The sarod has a wooden body covered with skin and a fingerboard covered with steel. There are twenty-five strings and fifteen of these are sympathetic strings. Acting as a resonator is a metal gourd. A triangular plectrum is used to pluck the strings. Ustad Amjad Ali Khan and Ustad Ali Akbar Khan are some renowned sarod players.

This is one of the oldest and most popular bowed instruments in India. The body of the sarangi is hollow and created from teak wood decorated with ivory. The sarangi is held vertically and a bow is used to play it. In order to play, it is required to press the fingernails of the left hand against the strings. Ustad Sultan Khan and Ghulam Sabir are famous sarangi maestros 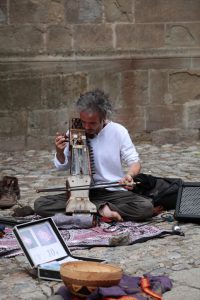 a man plays the sarangi

The flute is simply a cylindrical tube and is associated with Indian music for a very long time indeed. The flute is held horizontally and points downward when it is played. You need to cover the finger holes with the fingers of the right and left hand. Variations in pitch are generated by changing the length of the air column. Some well-regarded flute players are Pandit Pannalal Ghosh and Pandit Hari Prashad Chaurasia.

This is a traditional instrument and connected with occasions like weddings and temple processions. The shehnai has finger holes to produce notes. A famous shehnai maestro is Ustad Bismillah Khan.

The tabla is the most popular North Indian instrument. It is made of a pair of drums. It is created from wood while the head is created from animal skin. Both the drums contain a black spot in the center composed of iron dust. 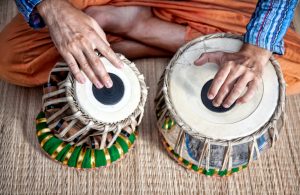 This is a popular musical instrument. It is more popular in the north of the country than in the south. It has a keyboard that is played with the right hand. It works on a system of bellows and the left hand is used to operate the bellows.

Last on our list is the mridangam. Mridangam is a very popular South Indian instrument. It is played at dance performances. It is made of wood. There is a double-headed drum. The right head is smaller than the left head. Layers of skin are used to make the two heads. Hands, palms, and fingers are used to play this instrument.

So what is the word I would like you to remember for today? It is ‘popular’. Let’s use these words in some sentences: