I am in the Indian city of Patna at the moment. Let’s take this opportunity to talk about Patna!

Patna is the capital of the state of Bihar in India. It is located above the ruins of ancient Pataliputra, which happened to be a massive center of power for several centuries. Patna was known as Pataliputra in ancient times. It was the capital of the Maurya and the Gupta dynasties. Currently, Patna has developed into a modern city and is one of the major cities of eastern India. It is the second-largest city in eastern India when it comes to the population. It is located on the southern bank of the Ganges river.

The ancient city of Pataliputra was established in the 5th century BCE by Ajatashatru, who was the king of Magadha (South Bihar). His son, Udaya, converted it into the capital of Magadha and it remained so for a considerable amount of time. The Maurya dynasty ruled in the 3rd and early 2nd centuries BCE up until the time the city was sacked by Indo-Greeks. After that, the Shunga dynasty began and ruled until approximately 73 BCE. Pataliputra maintained its status as a center of learning and became the capital of the Gupta dynasty. By the 7th century, its power had declined and it was deserted. In 1541, the city was refounded as Patna by an Afghan ruler and once again achieved prosperity under the Mughal Empire. It was handed over to the British in 1765.

Nalanda is an important tourist attraction that draws visitors from around the globe. It ranks amidst the first few residential universities in the world. Set up in the 5th century AD, during its prime, scholars and students from countries like China, Korea, Turkey, Indonesia and Persia visited it. Statues of the Buddha in various sizes can be seen here. The famous Chinese traveler, Hieun Tsang, stayed in Nalanda during the 7th century and gave a detailed account of the university as well as its architecture. 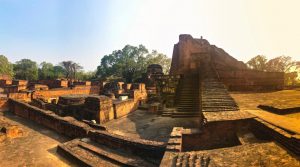 Patna is a sacred city for Sikhs (people who follow the Indian religion of Sikhism) as the last Sikh, Guru Gobind Singh, was born here.

Patna is also home to Golghar, which is an excellent specimen of the architectural beauty of the land. Golghar was built in 1786 to use as a granary to store grain when famine struck the city. It consists of steps that take you to the top. The view from the top is impressive as you can view the majestic Ganges flowing beneath.

Patna is home to Bihar Museum, which is a contemporary landmark displaying sculptures made of bronze and old coins from the region. Located nearby,  the famous Patna Museum displays a casket which is believed to contain the ashes of the Buddha. The Patna Zoo (more formally known as Sanjay Gandhi Botanical Gardens) is one of the biggest zoos in India. It was set up in 1969. The zoo serves as a home to 110 species of wild animals. We can find white tigers, lions, monkeys, hippopotamuses and lots more. The place is also famous for bird watching. The botanical garden contains over 300 species of plants, trees and herbs.

So what is the word I would like you to remember for today?

It is ‘located’. Let’s use this word in some sentences.