By the time you read this, January will be nearly over already. Although I normally spend the first few days of the year setting goals and planning out our travels for the year, thanks to the 2020 happenings, we are foregoing the usual routines to take joy in the day-to-day plans that we make.

So, this month, I thought that I would talk a bit about how I do this: through mindfulness meditation.

Probably, you have heard about mindfulness and meditation. It has been a growing trend over the past decade despite its long history in Buddhist practices in the East. Now that the West has cottoned on to the concept, turning meditation practice into mindfulness, it has become more salient in our daily vocabulary.

What is it? I first started doing mindfulness meditation about ten years ago when I started to get into the world of yoga. Before that, I always pooh-poohed the idea of meditating beliveing the common misconceptions that “my mind cannot be stopped”, or “there’s no way that I can ever NOT think about something”, etc. In the same way that people say that yoga is not for them, because they think their bodies are inflexible or there is no way that they could stretch that much, my mind remained inflexible. However, the reason that mindfulness began to work in the Western brain is because the activity is explained as not necessarily an emptying of the mind, but rather an awareness of our thoughts. This is an easier concept to wrap our heads around.

To challenge myself, I signed up for a 30-day Mindfulness Summit. It was through listening to daily talks by various experts in the field and practicing on my own (often with guidance) that I was able to fully learn what impact it had on my way of thinking, personality, and life overall.

After completing the summit, I joined a two-year yoga certification program to become a yoga instructor of yoga instructors where we trained to meditate for up to an hour. Through intensive study of my body, breath, and becoming more aware of my thoughts, I fell in love with this practice and now advocate for everyone to give it a real try.

So, returning back to being joyful in the day-to-day plans that we make rather than focusing on the full year goals, I endeavor to take time each day in the morning and night to appreciate the activities that we have planned and give thanks for what we did that day.

Why twice a day? Although there is great benefit in doing one sitting for a half hour or an hour, it is rather difficult in our modern busy time to find an entire hour to set aside for just sitting. However, it is generally easy enough to take 15-20 minutes twice a day to do this. While I may not go into a deep meditative state, which is preferred, it is enough for me to check in with myself and set my intentions or give thanks for what I have achieved.

Why not try it?  Did the statements above make you nod your head in agreement as to why you think you cannot start meditation? If so, I challenge you to give a try even for two minutes. Close your eyes. Take two deep breaths with an open-mouth, heavy exhale each time. Starting with the third breath, take one of your hands and open it palms up. Use your other hand, and trace from your pinkie to your thumb slowly. As you inhale, trace up the finger. As you exhale, trace down the other side of the finger. Repeat until you reach your thumb. How do you feel? 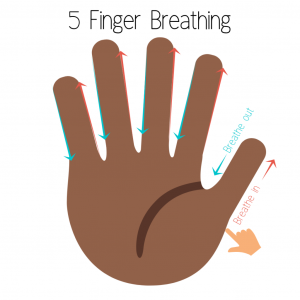 Even with just seven slow breaths, you can release tension and take a moment to just breathe. In doing so, you may find that when your mind returns to the present, you feel a little lighter, the daylight may seem a little brighter, and in that you can find your joy. Happy meditating and see you next month!

– This phrasal verb expresses the idea of an idea being understood or something catching on.

e.g. The kids thought they had gotten away with their trick until their parents cottoned on to what they were doing.

– With multiple word forms, this is more commonly used as an adjective to refer to something that stands out. e.g. The presenter summarized his salient points for the audience in his closing.

– This verb is used to express disagreement or dislike for an idea or concept.

e.g. Her father pooh-poohed everything she suggested that they do for their next holiday.

– This idiom refers to understanding something.

e.g. The difference between different vocabulary words that mean the same thing is hard to wrap my head around.

– Used as either a verb or a noun, this is used to express the idea of arguing for or supporting a cause or belief.

e.g. It is important that parents advocate for their children when bullying happens.

– This verb refers to the act of trying to do something.

e.g. We always endeavor to do our best for our clients.