Hello everyone! This is Priya.

Goa is a small state located along the western coast of India. It is visited by many international and domestic tourists every year. It has beautiful beaches, architecture and places of worship. It is rich in flora and fauna and boasts a vibrant culture. It has a 131-km-long coastline and is known as the Queen of Beaches. The major attractions are the sun, sea and sand and it is a perfect location for those who want to indulge in some relaxation.

The Portuguese ruled Goa for over 450 years until 1961 when it was liberated. Goa shares its boundary with Maharashtra to the north, Karnataka to the east and south while the western coast runs along the Arabian Sea. Goa is the smallest state in India and the fourth smallest populated state in India. The richest Indian state also happens to be Goa. The capital of Goa is Panaji while the largest city is Vasco da Gama.

Goa is unique in India for its Portuguese heritage and resulting architecture. The Portuguese entered Goa in 1510 and stayed until 1961. As a result of this long stay in India, we can see Portuguese influence in the state’s architecture, including its churches, forts and cathedrals.

The Basilica of Bom Jesus, a famous landmark located in Old Goa (Velha Goa) – a historical city and a capital of Portugese India until 18th century.

The biggest attraction in Goa is its string of beautiful beaches. Some of the more famous beaches are Arambol, Baga, Palolem, Anjuna and Mandrem. Each beach has its own vibe and all attract a huge number of tourists from both inside and outside the country.

Goa is also famous for its cuisine. Goanese cuisine is full of heavenly scents, spices and flavors. You can feel the Indo-Portuguese influence in the food over here. Goan food includes a number of tasty dishes arguably the most famous of which is classic fish curry rice. Pork is always had on festive occasions and the most well-known preparation is the ‘vindaloo’ (a curry dish). A lot of coconut is used for cooking and spices like coriander, chilies, cumin, garlic and turmeric are liberally used. They have a popular drink called Feni which is made from the juices of cashew apples.

I will introduce a common Goan practice. At the end of the day’s work and just before the evening meal, the young and old of a family get together to sing devotional songs. Goan music is popular in general and each village has a band of its own. Music has a very important role in Goa in bringing people together and creating cohesion and harmony.

There are a couple of festivals that are celebrated in a grand way in Goa. One is the Goan Carnival  which is celebrated for almost four days in the month of February/March. It is famous for its vibrant and colorful processions, dance and floats. Holi is the other festival which is a festival of colours to celebrate the advent of spring. 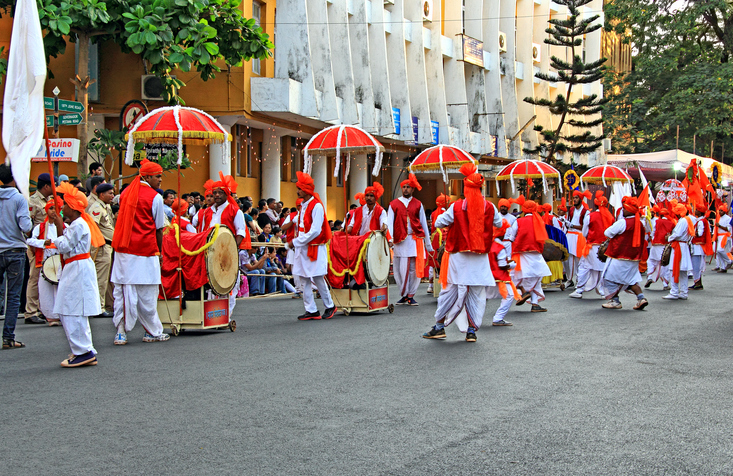 Let’s talk about some of the cities of Goa. The capital city of Goa is Panaji. It is situated on the west bank of Mandovi River. You can see typical Goan houses in Panaji as well as lovely Portuguese Baroque style buildings and villas. Margao is the second biggest town in Goa. It contains majestic architectural works, sculptures and paintings. It is also well known for its traditional customs of the Goan people. Vasco Da Gama is another famous town named after the Portuguese traveler, Vasco da Gama. People living in Vasco Da Gama are fond of music, dance and fun.

② Festivals fill me with joy and happiness.

③ Festivals are a time of celebration and cheer.

④ Goa is home to some unique festivals.

⑤ I am proud of the festivals held in my country.