Hello Fruitful Community! Greetings from Tara this May 2020.

So, imagine the opening scene of a movie. The colors are grey to give the dystopic tone of the film. People are walking on the streets, but there is a strangely symmetrical distance between them that seems to occur naturally. As the camera moves into a closer view of the people, you see that everyone is wearing a mask over their noses and mouths. Somehow, it feels like a familiar scene.

Cut to the present. Does this really sound like a scene from a movie or a glimpse of reality?

The other day, I ventured out to the Hibiya area of Tokyo during the week. It was clear that many businesses were operating, including the cafe where I could sit outside and people watch. At least 9 out of 10 people were wearing a mask around their noses and mouths. 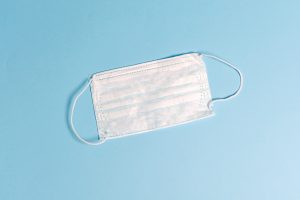 Some, who stopped in the cafe, chose tables that were a good distance from others. Some, despite coming into the cafe walking side-by-side (without distance), chose to sit at different tables slightly set apart from each other. Still, an equal number of people came in with masks on, but once seated at an outdoor table with their food and drink, the masks came off signaling that their companion(s) could do the same.

It reminded me of being in the UAE, where some Muslim women completely covered their faces in public and others just covered their heads. For followers of Islam, it is said to be the woman’s choice to keep herself hidden from non-believers and outsiders. While there are arguments that these women don’t actually have a choice, the point is that it has become an expectation for the more conservative in the faith. 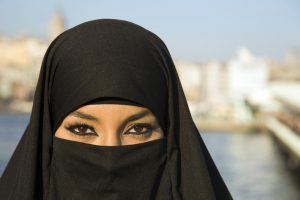 While this might not seem like a clear comparison since some of you may argue that people are wearing masks for health reasons rather than religious ones, I argue that it is still related to a belief system.

For whatever reason, people have come to believe that masks will protect them from passing on or catching COVID-19. Although there is no specific proof of this, it stands to reason, that partial blocking of the inhalation or exhalation of foreign particles cannot harm oneself or others. In Japan, it is not uncommon for many people to wear a protective mask year-round to decrease the amount of pollen one is exposed to as a way of reducing allergy symptoms, or during flu season to avoid the risk of exposure to or from those with symptoms. Whether or not the wearing of masks actually achieves the desired effect has not been scientifically proven enough that scientists and medical professionals tout it as a must-do for the health and safety of individuals. Instead, it is a societal belief system that it works; so, people do it.

As someone who never touches anything on the train because I believe that germs fester on the hanging handles or bars, I strongly question others’ faith in the masks, as it does not mean that people wash the parts of the body that touch these items. Also, as someone who has been showered more than once in the neck by the so-called believers, who think that the simple act of wearing the mask means that if they sneeze their spittle doesn’t spread, I fiercely argue against the efficacy of covering one’s face as a form of protection. Instead, it seems to provide a false sense of safety and security for the perpetrator rather than the victim.

Additionally, there is a strong argument for going about as usual – uncovered – since our bodies are living machines that learn how to protect themselves from foreign agents through exposure. If we try to block the machine from moving forward, then what happens? We dig into a rut, or limit exposure so that when something really strong and foreign does break through, our bodies are unable to fight it.

Also, I further argue that wearing masks all the time is more unhealthy than not wearing one at all. Breathing in your own CO2 emissions at such high concentrations is a problem. It causes skin problems and other health or mental issues. Therefore, I do not think we are doing ourselves, or others, any favors by wearing masks. Instead, we are promoting the progression of a dystopia as described in a potential movie scene at the beginning.

Even though, in my opinion, if people are so concerned with not getting the virus, then they should just stay home and not go out at all, I acknowledge that it is hard to argue with a belief system.

As for me, I’ll let the dice roll!

– This is the adjective form of ‘dystopia’, which is an imagined state or society in which there is suffering or injustice to the majority.

e.g. Most zombie films are set in a dystopic world.

– This refers to a momentary or partial view of something.

e.g. No matter how well we know someone, we only have a glimpse of what they are going through.

– This is as it sounds. A way of passing the time is to sit and watch/observe people.

e.g. One of my favorite things to do to get character ideas for stories is to sit and people watch.

it stands to reason

– This refers to something that is obvious or logical.

e.g. Since my mother did not call me back, it stands to reason that she forgot.

– This is used when someone or something is praised to make other people think it is more important than it is currently.

e.g. Tiger Woods was touted as a golf prodigy before he actually won any major titles.

– This phrase refers to situations or actions that do not improve upon the current state of the situation or action.

e.g. Jill did not do herself any favors by continuing to talk while everyone was looking at her with irritation.

– This means to take a chance.

e.g. It’s not wise to let the dice roll by not wearing a seat belt when you drive.