This summer, my mother and two sisters came to Japan for the first time since I moved here in 1999. They had talked about coming over for quite some time, but it never went beyond just an idea.

What did it take to get them over here?
I had my first child last November, so they called me out of the blue one day, and said “We’re coming to see you!”

I was both excited and nervous. Before they came, I would have to get our apartment into a presentable state (no small undertaking). Also, I had no idea what to do with them when they came. I live near Nagoya, which is an easy place to live, but it’s so well not known for its tourist attractions. (I remember years ago reading a comment in the Lonely Planet that said there was nothing to do in Nagoya). I looked up “Things to do in Nagoya” and found there was actually a lot more to do than I thought.

I talked with my family many times before they came over, and every time made a point of telling them it was going to be very hot. They were also coming from New Zealand which was winter.

Anyway, the day finally arrived for them to depart for Japan, and I woke up to a message from my sister saying that the flight had been cancelled due to a typhoon (Not a good start.) However, they managed to get on a flight the next day.

They had a day and a half in Tokyo (The original plan was for three), which ended up being very rushed, so they never got a chance to really appreciate it. I think the crowds (combined with the heat) in Tokyo were also a little overwhelming for them. When they came to Nagoya, they seemed to like its more relaxed pace a little better.

They didn’t end up doing much in Nagoya, because they really wanted to spend time with their new family member, my daughter. I took them to a few sightseeing places around Nagoya though, and they enjoyed themselves. The highlight was Inuyama Castle. It has a fantastic view overlooking the Kiso River, and is one of only a few original Japanese castles still standing. We had a volunteer tour guide, a lovely old lady who explained the history of the castle as we walked around. It rained as well which was a welcome break from the summer heat. If you are ever in the area, Inuyama Castle is definitely worth checking out. 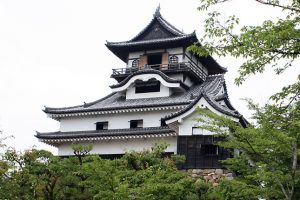 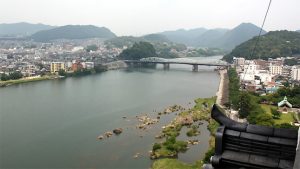 After a week in Nagoya, we all travelled to Kyoto, Kobe, and Osaka.

In Kyoto we went to Kiyomizu Temple, Yasaka Temple, the Gion district, and Fushimianari Shrine. They were all fantastic, but the thing we enjoyed the most was riding on the rickshaws. These were fairly expensive, and ordinarily we wouldn’t splash out on something so touristy, but we all had a “You only live once.” moment and went for it. The guys pulling the rickshaws gave us a very insightful tour around the Yasaka Shrine area. They were university students and all incredibly charming. If you are in Kyoto and feeling a bit extravagant, I highly recommend riding a rickshaw. 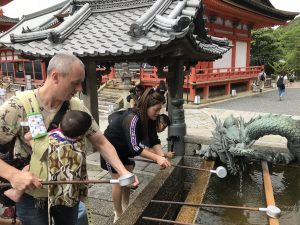 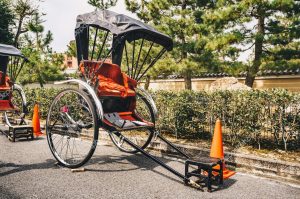 My family seemed to like Kobe the most. On whim we decided to go on the ropeway that runs up the Rokko mountain chain. We were expecting to just go up, see a nice view for a while and return. But they actually have many things to do up there. We tried the local beer at the top which was delicious, wandered down through the Nunobiki Herb Gardens, relaxed in some hammocks on the hillside, and chilled out with our feet in a footbath overlooking Kobe harbor. My mother still talks about the ropeway as being her most memorable experience. 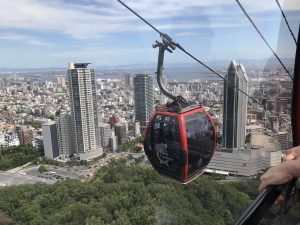 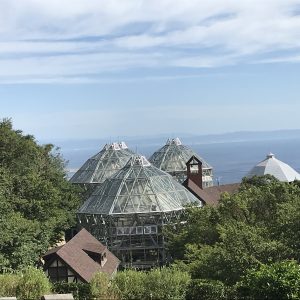 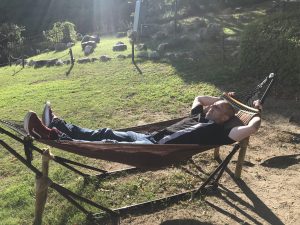 Osaka was a lot of fun. We planned to go to many places there such as: Dotonbori, the fish markets, the Sumiyoshi Taisha Shrine, Osaka Castle, and Tsutenkaku. However, the heat was starting to get to everybody and we only managed to get to the Sumiyoshi Taisha Shrine, and Osaka Castle (both of which were fantastic). We really needed a couple more days there. We didn’t even get to eat takoyaki.

Osaka was the last leg of the holiday, and where we were to part ways. We said our goodbyes at Osaka Station, and their long awaited visit to Japan was over.

Travelling to different places in Japan with them reminded me of what a beautiful country Japan is. When you’re living and working somewhere for a long time, it’s easy to forget what’s out there. I’m so glad I got to do it with my family.