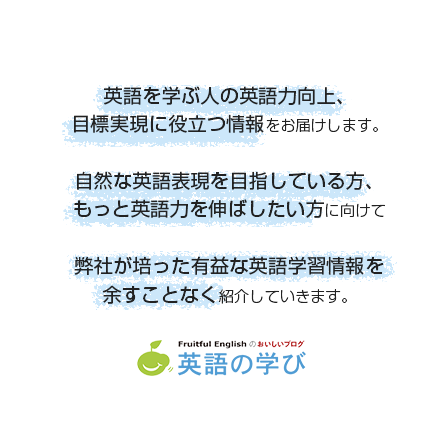 Hi, it’s Rodd here.  I just spent about five days on a trip to go to a wedding up in the northeast of Thailand very close to the border of Laos.

“Tying the knot” is an informal way of say to get married.

The origin of “tying the knot” is probably from about 1500 years ago from the Celtic(pagan) marriage ceremony of handfasting, where the hands of the bride and groom were tied together at the wrist during the ceremony.

It was a long drive.  About 15 of us set off at about 1 am in the morning from Pattaya on the gulf of Thailand and drove all night north arriving about 11 hours later, some of us were on the back of a truck, some in a car following as you can see in the picture below, and later others would fly in as well. Then we stopped off for some supplies and soft drinks for the wedding party(the alcohol was already waiting at our destination). 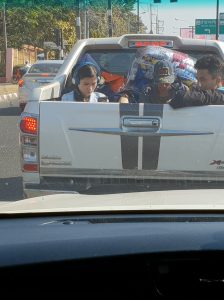 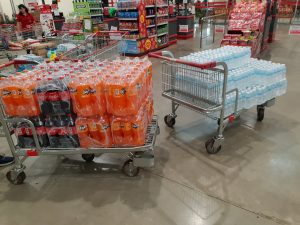 Once the shopping was done, we finally arrived at the destination where the bride and groom to be would “get hitched”.  To “get hitched” has the same meaning as “tie the knot” and originates from hitching horses together to work as a team. As you can see from the pictures below, preparations were underway and we were just in time to help unload a pig off a truck as you can see me and my friend doing so below… 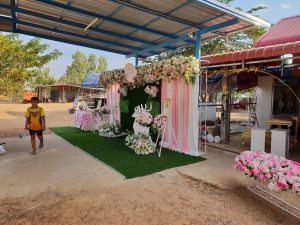 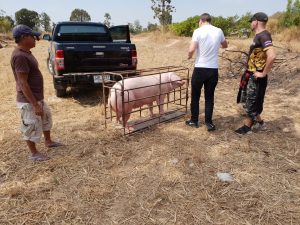 The case of the disappearing cow…

After unloading the pig successfully, we all sat down and had many beers and listened to music into the night. About 10 pm, new were told a cow that was destined to be butchered and cooked for the guests the next day had “eloped” and disappeared… To “elope” means to run away, and it was this cow’s lucky day because if an animal manages to run away like this, it is bad luck to use it for a wedding, so it gets to live out a happy life after that eating grass.  However cows are expensive, so everybody there(many already having had too many beers) took off into the rice paddies to search for it.  It was nowhere to be found(and would not be for two days more). As it happened, they had to knock on a neighbours door at about 10:30pm and ask if he had a cow they could borrow.  Luckily he did(not so lucky for that cow though I suppose).

The Big Day and the Procession

We all had to wake up at about 6 am the next morning as the party would kick off at 7 am.  We all stumbled out of bed a bit hungover and tired.  Put on our good clothes, and headed for the brides house.  We arrived to find Thai music blaring from a concert truck and a big stage already set up, beers and Thai whisky already being served along with food… what a breakfast!  We got stuck in!  To “get stuck in” means to enthusiastically eat and drink.  The concert truck moved off down the road about two kilometres distant, so, we all walked and followed the truck – this would be the start of the groom’s procession…

Here is the truck covered in speakers with a live band inside and all gathering around it. 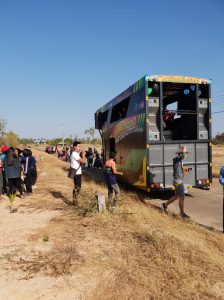 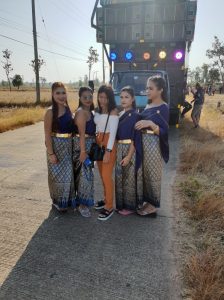 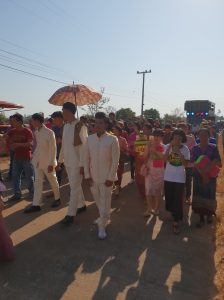 In western style weddings it is the bride who walks to the groom, but in Thailand it is the other way around, so everyone goes with him to meet his new bride and watch them “tie the knot”.

All the bride and grooms family sit in a circle and hold a string, so they all joined.  Then we listened to a monk chant… 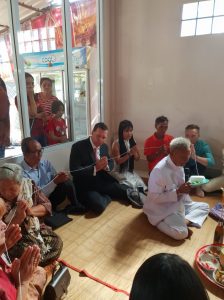 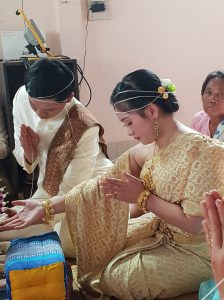 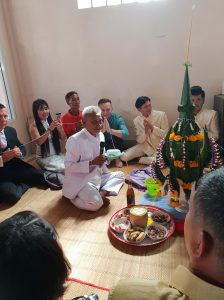 After that all close friends, family, and the bride and groom tie strings around each others wrists… so we all “tied the knot” together literally!  Here is my friend from Germany getting some strings tied to him and me below having a boogie(boogie is an idiom for dance) with strings on my wrist…  I still have mine on now, we are supposed to keep them on  as long as possible for good fortune. 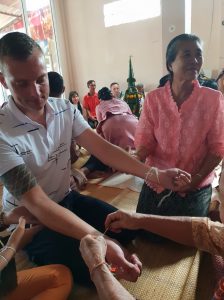 After that, the ceremony was done, the “knots were all tied” and then it was the concert and party time…  we stayed for two days more, eating, fishing, and having fun, but that, everybody is a story for another time! 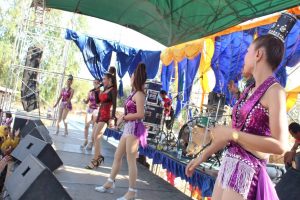 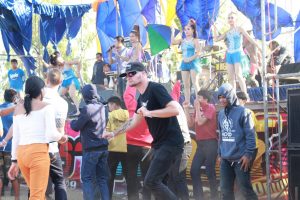 長く日英翻訳に携わっており、どうすれば英語として自然かをうまく説明できる人気の講師！間違うことを恐れず、まずは書くことが大切であるというのをポリシーにしています。
座右の銘は「Never be afraid to always try new things and places, and enjoy life to its fullest.」

長く日英翻訳に携わっており、どうすれば英語として自然かをうまく説明できる人気の講師！間違うことを恐れず、まずは書くことが大切であるというのをポリシーにしています。 座右の銘は「Never be afraid to always try new things and places, and enjoy life to its fullest.」