My wife and I have a guinea pig, and she once asked me about the origin of that English name, and whether the “pig” part in it was in any way related to a regular pig, which is obviously a much larger animal.

“Hmm, it’s an interesting question”, I replied, as I hadn’t really thought about that myself. After a quick search on the Internet, as kind of expected, I learned that those two biologically had nothing really in common, and the guinea pig is a rodent species.

Why would it then be called “pig”?

It still seems to be unclear, but its common name “guinea pig” or some similar term was most likely first used by European traders who brought them on ships to Europe from South America around the 16th century.

And here we all can somewhat guess why one would call these little friendly creatures “pigs”. Well, they seem to resemble their much bigger friends in some ways. For example, they have somewhat big heads relative to their bodies, bulky necks, round rumps, as well as pink ears with quite visible veins, which is easy to notice especially in my guinea pig. Not only that, the sounds they produce may seem similar to those of actual pigs’, especially their most recognized and adorable squeaking. So, we could sort of think of them as pigs that have been shrunk.

What about the “guinea” part of their name?

One could think perhaps they originally come from Guinea, but just like with the origin of the “pig” part, it’s not the case here either. One of the considered explanations would imply that they were brought to Europe via a route that included the Guinea region, and so people would eventually think they had originated there.

Another theory suggests that the term is actually derived from “Guiana”, an area in South America, which would sound somewhat logical.

Interestingly, some European languages use a name that can be directly translated as “little sea pig”, German “Meerschweinchen” and Polish “świnka morska” (direct translation from German).

And what about the Japanese easily memorized “モルモット”?

This one seems to originate from “marmot”, also a mountain-dwelling rodent, since this term was used for guinea pigs by the Dutch traders who first brought them to Japan in 1843.

Here is something funny, or maybe odd? We initially called our guinea pig “ももちゃん”, but as we got more familiar with our little family member, it somehow changed to “ぶたくん”.

Yes, literally “ぶたくん”, ideally pronounced with extra emphasis on “ぶ, almost an exclamation. Maybe not the prettiest name, but it doesn’t change the fact that we love this little creature. 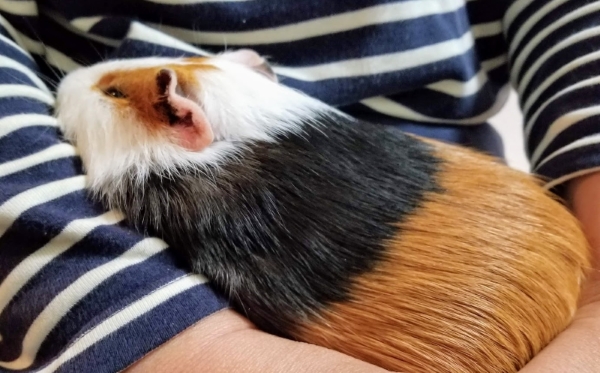