Hello, this is Simon.

Life has been pretty uneventful recently. With working from home and looking after my daughter, every day seems pretty much the same. However, the other day there was a small break in the monotony.

I was walking my daughter to the park, as I always do, and had gotten only about 20 m down the road, when I heard someone say “sumimasen”. I looked around but couldn’t figure out where the voice was coming from. I heard it again, and looked up to see my neighbor calling down from her second floor balcony. She proceeded to tell me that while she was hanging out her washing, her one-year-old daughter had locked the door to the balcony, trapping her there. I asked her what she wanted me to do, and she asked if I could call the police.

I’m ashamed to say, that I didn’t actually know the number for the emergency services. I knew that it had ones and zeros in it, and have actually asked my wife a few times in the past what it was, but soon forgot. So, I asked my neighbor and she told me “110”. I then called the number, and talked to the operator who asked me a number of detailed questions, one of which was my address. Another thing I’m embarrassed to say, is that I only knew our address to the block number. So I had to ask my neighbor that as well. At the end of the call, the operator asked me to also call the fire department, because a ladder would be needed.

As I waited for someone to arrive, my daughter started getting restless, wanting to go to the park, but I managed to convince her to stay by telling her a big red truck (fire engine) would come. In the distance we could hear the siren, so we listened as it got louder and louder, anticipating the arrival of the big red truck

Finally it arrived, sirens blaring, and it turned out to be a big scene: two firetrucks, an ambulance and a police officer on a motorbike, maybe 10 people in total. I really felt for my neighbor. I imagine she was mortified by all of the unnecessary attention. While it did seem like overkill, I was impressed at how seriously they took even such a seemingly minor problem, and their overall professionalism. If I was ever an in emergency, I felt that I would definitely be in safe hands.

While watching it all unfold my daughter had begun to reach her limit. So, I went to the police officer and told him that I had to get going, and asked if I was needed there anymore. He thanked me for calling them and said I could go.

That evening my neighbor came with her husband and daughter and gifted us some nice cookies. We told them it was unnecessary, as all I done was make a phone call. It was a very nice gesture, and of course appreciated. 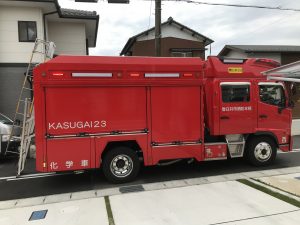 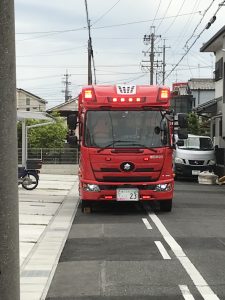 This may sound strange, but thinking back about this reminded me about learning new words and phrases. I’ve been in Japan for about 20 years now. And, in our new house for about six months, but I wasn’t able to recall the number for emergency services, or our address. However, I can now, after saying these to someone else just once. I can now recall the emergency services number, our address, and also the number for the fire department “119“.

Learning a language is a similar thing. We can study words countless times and continuously forget them, but actually using words that we have studied for some reason helps to solidify it in our memories. By using them, I mean saying them out loud. I had written my address down, many times before, but it wasn’t until I told it to someone else that it stuck in my brain. It really highlights the fact that language is primarily a spoken form of communication and that actually saying things is the best way to memorize them. Just think about how we memorize a phone number. We say it repeatedly.

As you write and submit assignments, you have the opportunities to learn new words and phrases. So, if you aren’t doing it already, please try reading what you have written, out loud. Not only will it help you to better recall things, but it can also help improve your speaking ability.

Below are some words and phrases that may come in handy:

To “proceed to” do something means to do something after doing something else (e.g. After sitting down beside me, he proceeded to tell me his life story.) In my case, my neighbor had just called out to me, so when I looked up at her, she “proceeded to” tell me her situation.

To “blare” means to make a loud noise, often to the point of being unpleasant. It has a negative nuance, such as in: “Music was blaring out of the party.” or “The speakers blared for over an hour.”

“I really felt for my neighbor”

To “feel for” someone means to have feelings of sympathy towards that person (e.g. He’s been through some hard times recently. I really feel for him.)

“Mortified” means very embarrassed. It comes from the verb “mortify” which used to mean “put to death”. When people are incredibly shocked or embarrassed they can sometimes appear as though the life has been taken out of them (e.g. When her son was brought home by the police, she was absolutely mortified.)

“Seemingly” is an adverb meaning appearing to be something (often when it is not true). It is useful for modifying adjectives (e.g. She was seemingly confident, but deep down she was terrified./He was seemingly competent, which is why we hired him for the job.)

To be “in safe hands” means to be protected by, or in the care of someone who can be trusted. (e.g. Mother: If anything happens call me straight away. Babysitter: Don’t worry. Your children are in safe hands.)

“watching it all unfold”

To “unfold” means for something that was folded to become open, but it can also mean for a situation or events to gradually develop or be revealed, like the slow opening of a present (e.g. Since the initial scandal, I have been watching the events unfold on TV.)

Anyway, I now know, and can use the emergency services number, but I hope that I, and all of you, never need to use it.

See you next month! Take care!