It’s my first blog here, and I thought I would write about my trip to the place mentioned in the title, officially called Okunoshima (大久野島) , even though it was already few years ago.

The funny thing is back then I learned about it accidentally when I was checking some Polish news website (I’m originally from Poland) and spotted a title which said something like “Magical Japanese island populated by rabbits!”

When I told my wife and we got to know more about this somewhat mysterious place, we knew we just had to visit there.

To get there, we first flew from Haneda to Hiroshima Airport, and then took some local trains and a small bus to eventually get on the ferry connecting the mainland with the island, within approximately 3 km distance.

The island surely didn’t disappoint, both in terms of sightseeing and interacting with those lovely animals.

We already knew from some YouTube videos the majority of the rabbits wouldn’t be shy, and rather the opposite, they would literally run to you once they spotted you, as they would likely expect you to feed them.

Still, actually being there and seeing them wandering basically everywhere and surrounding you closely without any fear was probably one of the most surreal experiences for us. My wife was in heaven, which made me even happier 🙂 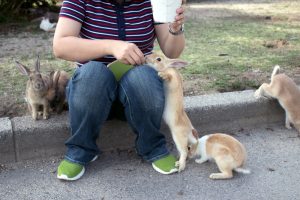 We stayed one night in the island’s only hotel, and as the evening approached, it was yet another enchanting experience to see those feral bunnies lying down by the shore completely relaxed, as if observing the sunset, or scattered in front of the hotel throughout the night. 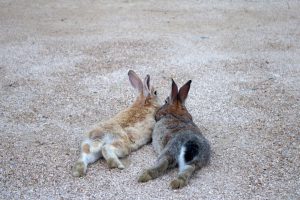 Another great thing about that place was that it wasn’t at all crowded, with a relatively small number of tourists, but surprisingly, of various nationalities. We could still feel we are just observers of that unusual community, and hopefully weren’t too intrusive to them.

It might have changed though since the island has been getting more popular over the past few years.

We certainly want to visit it again in near future.